It has been a busy week over at the ol’ Refined Geekery office. I apologize about the lack of content as of late and promise to pick it back up when I can. In the meantime, I thought I would post a few awesome geeky valentine treats for you all.

First, I want to forward you to IGN who has created a list of “The 10 Most Bad Ass Couples in Movie History”. It is a good list, and I couldn’t agree more with their number one. I feel like Indy and Marion could have been higher but it is a fun read nonetheless.

Check it out here: IGN: The 10 Most Bad Ass Couples in Movie History

Next, for the hopeless romantic, hopelessly at a loss when it comes to what to give his special someone this year.

Tired of giving your loved ones the same old flowers every year, dropping your hard earned cash on something that dies a few days later? Think Geek has some awesome alternatives this year.

First, why not give her the same gift Mario would have given Princess Toadstool had she not been in that other castle (Doing who knows what…) The 8-bit rose is the perfect gift for your Player 2.

Tired of flowers in general? Feeling like same ol’ flora has lost its lustre… Think Geek has an awesome alternative: A bouquet of unicorns. Yes… Unicorns. The unicorns come in three different shades of love (purple, baby blue, and white). To quote Think Geek: “Think about it. Unicorns are magical. Love is magical. Unicorns are beautiful. Love is beautiful. Unicorns never fart. Love tries to fart in the other room.” 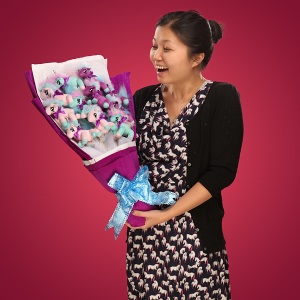