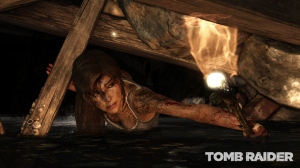 Crystal Dynamics, long-time overseer of the Tomb Raider franchise, has discussed at great length how their next Lara Croft adventure would be a re-birth for the franchise. Creating Lara’s “first” great adventure, which turned her from a young naive archaeologist to the hardened animal/dinosaur killer we came to know in her earlier games, Crystal Dynamics’ Tomb Raider promises a grittier approach to story-telling and combat.

Although the game does not come out until next Tuesday (March 5), reviews for the long-awaited Tomb Raider re-boot have started to flood the Internet. Here are a few top gaming outlets and their takes on Lara’s next/first adventure.

IGN: Tomb Raider is well-written, sympathetic, exciting, beautiful and just incredibly well-made. The single-player rarely makes a mis-step, and though Lara’s quick transformation into a hardened killer seems at odds with the narrative at first, the game quickly moves past it. It is a superb action game that brings a new emotional dimension to one of gaming’s most enduring icons, and repositions her alongside Nathan Drake at the top of gaming’s action-hero heirarchy. (9.1/10)

Games Radar: Even if you’ve never been a huge fan of Lara Croft’s fortune-hunting adventures, Tomb Raider is sure to impress. Its expert sense of pacing, captivating setting, and dark tone create a truly memorable experience that’s further enhanced by an immense level of detail. Lara croft, the oldLara Croft, is dead. In place of a dolled-up gunslinger is a do-what-it-takes survivor–and we hope she hasn’t had her fill of adventuring just yet. (4.5/5)

Polygon: It’s easy to point out the many ways that Tomb Raider borrows bits and pieces from other popular games of the last five years, but Crystal Dynamics has blended these disparate strengths into something remarkable. It’s cinematic yet open, intense yet laid-back, fresh yet polished. It’s a near-perfect embodiment of the age of the Xbox 360 and PlayStation 3 with a hint of what to expect next.(9/10)

Edge Magazine: Whether she’s huddled up against the cold or sending five men to their doom with an explosive arrow, this is still Lara Croft, one of gaming’s most distinctive heroes – and now she has a personality that extends far beyond the bounds of her bra straps. If the purpose of a reboot is to redefine a character and set them up for the future, then this is a job well done. (8/10)