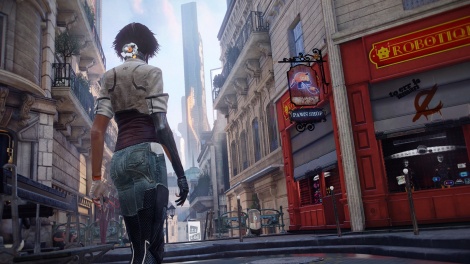 Oh, the perils of new IP. Does a developer risk spending money on a new idea that may not take, or is it easier to simply spin out a new sequel to a fatigued franchise. It is very rare that we get to see something fresh and original this late into a console cycle, but the people at Capcom and Dontnod Games seem to be willing to take a risk with Remember Me, a cyber-punk-ish futuristic dystopia where people have implants to share their memories ala Facebook, but also where evil, authoritarian corporations can control, distort or erase those memories with a push of a button.

The reviews are not quite reaching the promise of the premise, sadly, as it looks like we have a rather interesting story but somewhat of an unremarkable game. Now, I am willing to give this game the benefit of the doubt. Many people bashed the repetitive and derivative gameplay of Enslaved: Odyssey to the West, but I was willing to forgive its gameplay thanks in part to the rather wonderful storytelling and voice acting. Who knows, perhaps Remember Me could attain the same level of cult status that Enslaved has to a swath of fans.

But what do the reviewers have to say:

Edge Magazine: Schlocky and silly in places, but potent and reflective in others, Nilin’s tale has bags of heart to play off against its flamboyant bosses and existential quandaries, all grounded by a charismatic female star. While the world building isn’t on a par with the best – hampered by a civilian population as robotic as its metal cohorts – a rich backstory and architectural detail make Neo-Paris a place worth visiting. (8/10)

Polygon: Remember Me suffers when it pushes its design beyond the capabilities of its mechanics, when its gameplay ambitions exceed its capacity to meet them. Most games would falter under the weight of those mechanical complications, and Remember Me eyes trouble the most pointedly when it falls prey to overused video game conventions. But Remember Me‘s fiction and world-building make it more than just another running, jumping and climbing-oriented beat-’em-up — they make it a future worth exploring. (8/10)

Games Radar: An inconsistently enjoyable experience. Its world provides an interesting glimpse into a could-be future, and the Memory Remix puzzles and Pressen system help offset its extreme linearity and stiff combat. There are enough good ideas here to keep you playing from start to finish, but Remember Me’s rougher edges mean it’ll fade from your memory far sooner than you might like. (3.5/5)

IGN: Remember Me is a likeable, even admirable game that tells a deeply personal story in a thoughtfully-fashioned world populated by richly detailed character models. But ultimately, it failed to challenge or excite me as a game, as all of its best ideas are confined to its overarching fiction rather than its gameplay. I rarely felt like a Memory Hunter except for the few Memory Remix sections. I’d love to spend time in this world sampling its fiction and tasting some of its ideas, but unfortunately I can’t say the same for the game, which is very forgettable. (5.9/10)

One response to “Meta-review: Remember Me (Xbox, PS3, PC)”