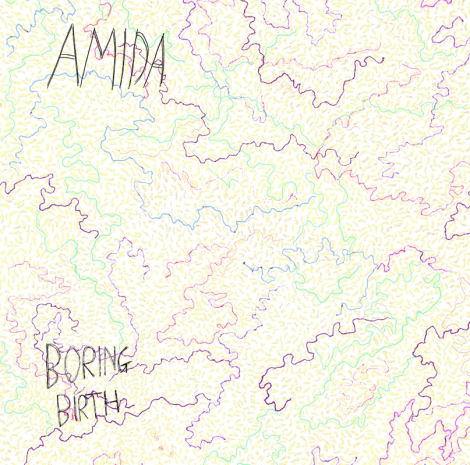 Amida is a 5 piece pop band coming out of Manchester. They had their debut in 2007 with an EP called “Arts and Crafts” and since then, they have been striving to nail the sounds of 1990s indie rock, following classics such as Pavement and Pixies. With their latest LP, “Boring Birth”, Amida continue to shape their sound around that core ideal, and for the most part it works. Indeed, Pavement and Pixies came to mind more than a few times while listening to Boring Birth, yet I can’t help but feel that they are also allowing for some early 2000s indiepop references, such as The Strokes. The almost hypnotic rhythm of the guitar work from Andrew Beswick and John Ammirati work well with Ammirati’s almost deadpan delivery on vocals. Think if Lou Reed was singing “Someday” instead of Julien Casablancas. That is a pretty close approximation of the middle third of the album. At times, this can lead to one song becoming somewhat indistinguishable from the next, but that doesn’t mean you won’t be tapping your foot the whole way through.
If there is a stand out on the album that should be celebrated, it is most definitely “Veil After Veil” which comes in at track 10. This song shows off the true technical musicianship of the band. The guitar comes in hard like some of the best Pixies songs (Gigantic, Debaser, etc.) Concentrating primarily on instrumentals, the song has some great guitar work, and more than any other track on the album you get a great sense of what Scott Challinor can do on the drums. There are still vocals, but they don’t come in until nearly the 2 minute mark. The song brings some excellent variety in sound to the album at a point when you are crying for something new and different. Other songs that provide a little bit of flair are “Plastic Ballet”, the albums closest thing to a ballad, and “For July” that starts off almost like a Chili Peppers track (some great bass work here) while finishing with strong vocals that carry a heavy Strokes vibe.
The album, while having 13 tracks, is only about 35 minutes long, due much to a few tracks barely making it past the minute-thirty mark. Boring Birth has a strong garage band feel to it, while deeply rooted in british pop. It’s funny how a sound that was so ever-present, and almost over done 15 years ago can come back and sound so fresh. In an age when indie music is dominated by either shoe gazer synth ballads or over-played singer songwriter tropes, it is nice to have some bouncy indie rock come and remind you that music does not need to be such serious fare. I enjoyed the album quite a bit and will come back to it whenever that monotony sets back in, if only to remind myself that electric guitars are fun too!