You may be noticing a trend: #lenovosucks.  Chinese computer giant Lenovo has suddently found itself facing a storm of great white heat coming from it’s Canadian customers. 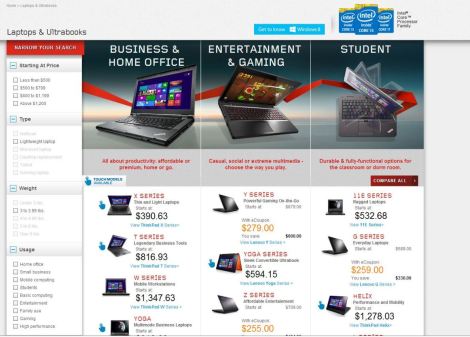 This past Wednesday, Lenovo Canada hosted a ‘doorccrasher’ sale. While many laptops were on sale through a few different portals, eagle-eyed shoppers quickly spotted the y410p for the insanely low price of $279 after applying the ‘doorcrasher’ coupon. That brought the 14” i7 multimedia powerhouse down from $1,389 for a whopping $1,100 savings. 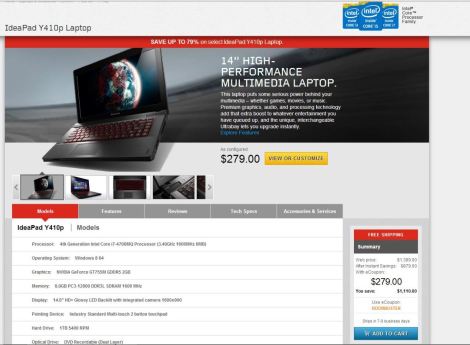 By Thursday news spread to Red Flag Deals (RFD), a Canadian discount forum, and sales of the discount laptop went through the roof.

This is where I jumped into the fray as did many others and you can follow the whole drama as it unfolded on RFD here.

While the Lenovo Canada site was heavily hammered the ads remained up into Friday and orders continued to pour in in the thousands.

Around Friday at noon, cancellation emails were issued by Lenovo. Customers were incensed and #lenovosucks begun trending across twitter.

Why so much anger?

While the price was too-good-to-be-true and many were clearly skeptical, the deal was legitimately advertised across the site in various banners, ads, and on the order page.  There were clear matches between the original price, discounted price, and the final price, not to mention a coupon that required deliberate activation in order to obtain the ‘doorbuster’ price. 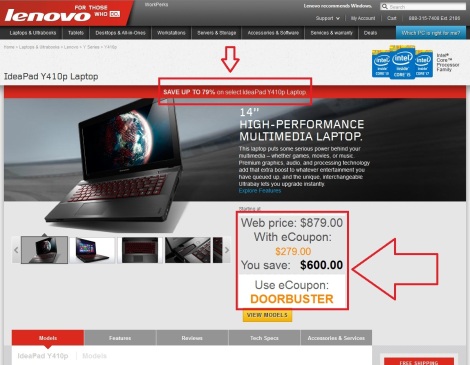 It was neither a typo or a mathematical error, and despite recognizing the error Lenovo allowed the erroneous price to remain active well into Friday night.

Further fuelling the #lenovosucks tag was the fact that along with their cancellation notice, many customers still had their credit cards charged a full 3 days after the announced error and have yet to be refunded.

Until today, Lenovo Canada has been silent, with resentment building and new tags like #lenovogate popping up. Some customers have begun to suspect that Lenovo had the more deliberate and nefarious goal of obtaining vast swaths of consumer information.

One RFD user HeavyDutyKronos provided an excellent post summarizing contact information for consumer protection agencies, media outlets as well as to Lenovo’s Facebook and Twitter accounts – if you’ve been affected I highly suggest you start there.

Today, Tuesday, Lenovo Canada issued a tweet directing customers to an explanation, of sorts, and indicated they would be offering a $100 coupon to those affected – my first investigative instinct had me check the #lenovosucks hashtag and sure enough new tags – #nocoupon and #baitandswitch are rapidly appearing alongside it.

Can Lenovo turn this around?

This is not the first time a hardware company has run into such issues. A similar incident involving gaming peripheral company Razer occurred following a fake coupon ordeal. Yet Razer honored the erroneous 90% discount on thousands of items. In response, Razer commented:

We want to do right by the community – Razer

Sean O’Shea @ConsumerSOS 2m
Would love to speak on camera (GTA) or on #Skype with #consumer reacting to #Lenovo_Canada $100 off, ahem, offer. Anyone happy/unhappy?