When Square Enix announced Murdered: Soul Suspect (developed by Airtight Games) last year, it hit a certain curiosity with me. It was a ghost story, but it was not a horror game. It had much more in kinship with a L.A. Noire than a Silent Hill, and that gave the title a certain level of novelty. Playing a recently deceased detective searching for his killer while littered with bullet holes just sounded, well… cool. Since its reveal, Soul Suspect has never really been on the top of any ‘most anticipated games’ lists, but I have always held out hope that it could provide a fun little deviation from the monotony of standard AAA shooters and RPGs. Well, the reviews are coming out and as it stands the game looks rather lack luster. However, I am holding out hope that there may just be more to this game than the current stock of reviews are laying bare. I am pretty sure I will be checking this one out. 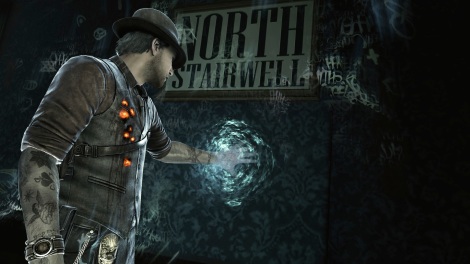 Here are what other people are saying:

Polygon: Murdered: Soul Suspect is awash in tropes, but somehow, that’s part of the charm. It’s a pulpy detective tale remixed as a classic ghost story, and it works as a sort of playable B-movie. It’s linear and mechanically simple, but it flows well and keeps a fast pace, at least as long as I wasn’t chasing down demons. Supernatural Salem was a rich, sad, beautiful place to visit, and as it turned out, Ronan was the perfect tour guide. (7/10)

Joystiq: the mystery at the heart of Murdered really is excellent, and putting the pieces together crime scene by crime scene should satisfy many an armchair sleuth. The hidden ghost stories are well worth finding, and though Ronan is a bit of a dull fish, the people who surround him are worth getting to know, however briefly. With some truly great ideas and some unfortunate choices, Murdered: Soul Suspect and its ghostly hero is neither heaven nor hell, but something in between. (3.5/5)

Eurogamer: It’s a Good 6, that delightful strata of games that stumble in the technical aspects, but compensate with personality and charm, somehow all the more enjoyable for their imperfections. I can’t pretend that Soul Suspect is a particularly great game, but I do know that it’s the sort of game I’ll still remember – and remember fondly – in five years’ time, which is more than can be said for most of its glossier rivals. (6/10)

IGN: There are some great concepts in Murdered: Soul Suspect, but they feel undercooked or underutilised, and the lack of demand for any real input from us makes Murdered feel like a pick-a-path game where there’s only one path. It scrapes by on the power of its central whodunnit mystery, but I can’t help but feel that Murdered: Soul Suspect is ten hours worth of unfinished business. (5.5/10)