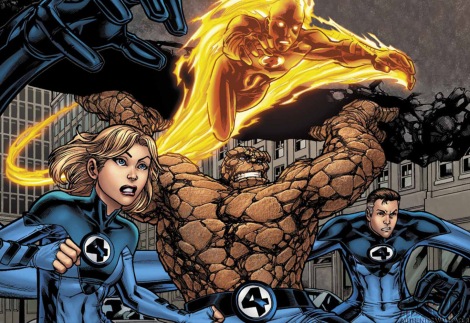 Somewhere Dr Doom is laughing, or at least he would be if someone was left to draw him. Yes it is with a heavy heart that we are being forced to say goodbye to the longest running Marvel property in it’s storied history: The Fantastic Four. And the reason? Petty squabbling over film rights. Well, that is not confirmed, nor would any Marvel exec ever admit to the fact, but it is all but understood that the underlying cause of Marvel’s termination of FF is due to Fox’s refusal to return the property’s film rights back to Marvel Studios. Long before this golden age of super hero cinema, Marvel, struggling to compete against DC’s success with the Batman film franchise, sold off many of its assets to film companies for rather cheap sums. It was certainly a short-sighted move, but in truth helped regenerate the current cinematic renaissance through 20th Century Fox’s successful X-Men franchise, as well as Sam Raimi’s run with Spider-man.

Well, now that Marvel is a true force in the summer blockbuster film industry, they want their properties back, and companies like Fox are not playing ball (and in truth, why would they?) Fox, who currently owns the  rights to produce Fantastic Four films, was set to lose the licence out of a lack of output, but instead of letting the agreement retire, decided to reboot the franchise, a film set to come out in the next few years. Such decisions have caused significant tension between Fox and Marvel CEO Ike Perlmutter, who out of what seems little more than spite toward his own company’s poor negotiation, is doing everything he can to downplay the Fantastic Four as a part of Marvel’s universe. They had already been reduced to a single monthly issue in comparison to the more active schedules of high-level books like Spider-man and the Avengers. According to Vulture: “With the new Fantastic Four movie on the way in the next few months, Marvel has very noticeably taken FF characters out of its promotional materials.” Vulture goes on to report that Marvel would do the same with X-Men, were the characters not so entirely central to the company’s overall universe.

The final Fantastic Four story line will be called “The End Is Fourever” and is being described as “the closing act on the First Family of the Marvel Universe.” The reboot film is currently set to arrive in August 2015, the same summer movie season as competing Marvel produced projects, Avengers 2 and Ant-Man.

My two cents on the issue: Marvel has built up a lot of good will with its recent film projects, but the heavy level of control they are exercising over their properties just rubs me the wrong way. I didn’t like how they handled Edgar Wright’s Ant Man, and to see their film motivations trump one of the most iconic superhero groups ever just saddens me.

6 responses to “Marvel cancels Fantastic Four not with a Bang, but with a Whimper”