Far Cry as a series has been at the upper echelon of open world shooters since it’s inception. The formula set forth in the first iteration was translated into a new appreciation for openness in the second (almost too much for some). In the third, it seemed as if Ubisoft Montreal had found the easy middle: a game that had a huge amount of openness, but had the character definitions that lead one to continue along a narrative path. The fourth seems more to follow it’s recent predecessor’s shoes than other past versions. In deed at first view it could be appreciated as a small step rather than any revolutionary jump. Most of the main pieces that made Far Cry 3 a joy to explore (the over-the-top main antagonist, the addictive crafting system, the outposts) are all there again in Far Cry 4. Yet it seems to be that this lack of true innovation is dividing some reviewers as it has a “been there, done that” kind of feeling. Without the compelling narrative hooks of the third game, the openness overwhelms without any true reason to push forward. Far Cry has been a series that has allowed Ubisoft to be very experimental with big budget game play. Let’s hope they do not go to this well too often without innovating as I would hate to see it turn into another Assassin’s Creed. Anyway, here are what the reviewers have to say: 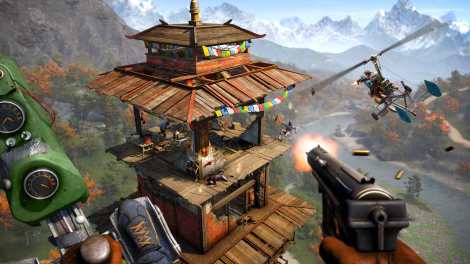 The Guardian: Far Cry 4 truly shines in the almost bacchanalian sense of freedom it bestows on the player as they traverse through its environment. In Kyrat you have the ability to go anywhere and do pretty much anything – much as Pagan Min would advocate. Here, the only pact you need keep is that with your conscience. God help you. (5/5)

Joystiq: There’s a staggering number of adventures to extract from Far Cry 4, whether you chase the ones laid out by the game explicitly, or the ones that develop naturally as you take in the sights. It’s another interesting and absorbing world to fall into, shoot through, burn and then guide to new beginnings. Far Cry 4 may have installed a despot, but it’s still the undisputed king of the open-world shooter. (4.5/5)

Games Radar: Dodgy though the plot may be, Ajay’s struggle to make sense of his inheritance suits a game that’s battling for a place in a world handed down to it by Far Cry 3 and other open-world action franchises. The result is hard to score because, that whiff of over-familiarity aside, the failings are easy enough to side-step – all you need do is head off the Golden Path. But the best open-worlders are those that balance their emergent odds and ends against a strong narrative thrust. Without a story as breathtaking as those forested vales and icy crags, Far Cry 4 rings a little hollow, and doesn’t fully achieve the spiritual heights this series is capable of. (4/5)

Game Spot: It’s a problematic campaign, certainly, forcing you to restart an entire mission from scratch if you arrive at your destination and realize you’d like a different loadout, and making you reach for the radio dial so you don’t have to listen to the worst radio personality this side of the Great Wall of China. It’s when you circumvent Far Cry 4’s major thematic flaws, inconsistent missions, and incessant nagging that you find the game you came looking for, breathing easy and enjoying the mountains that rise in the distance and the valleys that stretch beneath you. Like the terrain if depicts, Far Cry 4 travels both high and low, representing the good, the bad, and ugly of video games all at once. It’s awesome and messy and dumb and fun and annoying and gross and beautiful. Take any given adjective in your vocabulary, and chances are, it will in some way describe Far Cry 4. (7/10)