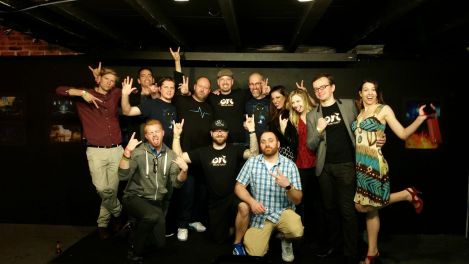 The Interesting International Collaboration Behind Ori and the Blind Forest

Ori and the Blind Forest is a beautiful, critically acclaimed platformer, recently released for both the Xbox One and PC. The game presents its players with a gorgeous painterly aesthetic, lush environments, and fluidly rendered animations. Yet, despite all its praise, one of the most fascinating stories surrounding Ori is not the game itself, but the unique development team, Moon Studios, that brought it to life.

Moon Studios is not your typical development team. It is an international collaboration of former AAA developers, working together remotely across great distances. Team members are located anywhere from Austria, to Israel, to the US and Canada, to Australia.

The studio was formed by former Blizzard character artist, Thomas Mahler, who serves as CEO of the studio. Working out of Austria, Mahler co-founded the studio with Gennadiy Korol (Israel) who also serves as lead engineer for Moon. The two began development of their first title “Warsoup”, an RTS-FPS hybrid, back in 2010. Less than a year later, the partnership with Microsoft was formed and the four year development cycle on Ori began.

While the game is published by Microsoft Game Studios, the team remains wholly independent. If anything, the relationship has given them many of the benefits of a first party development while being able to maintain their unique structure, one seemingly poorly fit with the typical first party system. Describing the relationship on Reddit, Ori Programmer Willem Vos noted: “One of the cool things about Microsoft being involved in the process of building the game, was that they have an experienced and outsider vision.”

The game drew initial inspiration from a marriage of both old-school gaming mechanics and traditional forms of both Japanese and Western animation. Speaking with Polygon, Mahler described the old-school nostalgia that lives on gaming forums like NeoGAF: “I grew up playing Super Metroid and I want games like that again. I read NeoGAF and constantly read how they want games like this but it’s not being done.” 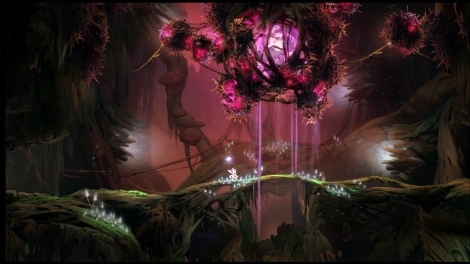 In congress with the retro mechanical style, Moon took a lot of inspiration from the anime work of Studio Ghibli in the game’s character design, particularly Princess Mononoke. One interesting inspiration, however, was Disney’s The Lion King, especially when it came to original design concepts. In that same Reddit AMA, Vos described the story process as one of iteration: “When we had a good basis for our story, we went and changed it a ton of times. Whenever we wouldn’t like an event, or when someone had a good idea to improve the story, we’d tweak it until we were satisfied”

Such inspiration is clearly worn on Ori’s sleeve as the expressiveness in its character design cannot help but permeate the toughest of jaded gamer exterior. Its gut-wrenchingly emotional beginning will affect both gamers and non-gamers alike. Yet to achieve such a slickly built game with so much physical space between developers was not without its own difficulties. Seemingly covering all corners of the globe, issues of time differences between teams were ever-present. Tasks were split between Vancouver, to Europe, to Australia. According to Ori level designer Michael Gagno, “Being distributed allows for some flexibility, but it’s very important for the team to communicate regularly.” The team had to use numerous online tools including: Skype, Slack and Google Plus for communication; Teamviewer for the sharing of screens; and, Dropbox for the constant sharing of documents. Indeed, without such tools being easily available, it is impossible to see how something as ambitious as Ori’s development could have been maintained. It is a fascinating globalization of game design that I cannot help but wonder if we will see more of in the future. Indeed, giant campuses such as Ubisoft Montreal could become a thing of the past.

Having just released the game, it is still too early to predict where Moon Studios may go next. Ori as a property is owned by Microsoft and while the studio is certainly attached to their creation, there is that feeling that they want to be more than a single property development house. Vos recalled a quote from a developer of Runic Game, the makers of Torchlight and Torchlight II in which they said “We don’t want to be the company that makes Torchlight”, adding “I can definitely see what they were saying there.” He added “Moon is capable of a lot of different types of games” and while he admits that another Ori game would be cool, little is known about the studio’s future plans, even within the team.

One response to “Getting to know Moon Studios”