Through his own admission Andras Ostrom is simply a filmmaker and musician living in Culver City, California. However his road to Los Angeles is not simple whatsoever and after interviewing him for Refined Geekery, I can wholeheartedly say that Andras Ostrom is no simple person!

Born in Budapest Hungary to a Hungarian mother and American father studying abroad, Andras spent his youth living throughout Europe including stops in Czechoslovakia and Austria. Now, at this point in the interview, I had to ask Andras whether he derived any of his musical interests or talent while living in Vienna, the same city the likes of Beethoven and Brahms lived and worked. Unfortunately not; his classical piano instruction began in Madison, New Jersey after he moved there at age 6. However for the purpose of this story, let’s just say he was visited by the ghost of Beethoven at a very early age while living in Vienna and was told to pursue classical music. Deal?

I recently had the pleasure of speaking with him exclusively for RefinedGeekery about his life and music video. Simply put, Andras Ostrom is a multi-talented filmmaker, musician, director, producer and performing artist and he has fused as many of those talents as possible in his beautiful music video ‘Massive Sonata.’ The video, which was shot primarily at the El Mirage Lake, a dry lakebed located in the Mojave Desert of San Bernardino County, California is available here and is linked at the end of this post.

I’ll be honest, when I first watched the video, I may have giggled at the first 10-20 seconds of the video. I thought, what is going on here? I was not necessarily sure where the artist (a Beethoven-like person in a period costume coming into the modern world) was going and I thought the costume juxtaposed with modern LA was a bit over the top. I found many of the opening scenes humorous but quirky, and the music fun and lively but then I realized the production value of this music video. It was not some campy, low-budget, cheese video that the YouTube culture has embraced; it was in fact a very respectable piece of art that needed to be seen and shared and appreciated. As you watch the video, you gain an appreciation for classical music that Andras Ostrom had intended.

I think we can all relate to the artist – someone who is out of his element, alone and stuck in a world he knows very little about. We all go through life at times not knowing what’s going to happen to us next. We have a hope that things will improve, or that success will find us, and we all face challenges and obstacles that often seem very difficult to overcome, but it’s usually something/someone quite serendipitous that comes along that changes our life for the better. 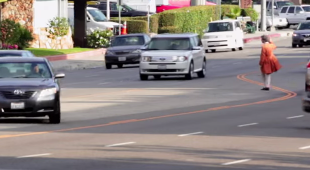 Early in the video, the artist is swimming in a dreamy body of water; his costume and hair freely flowing in concert with the sound undulating from the song; waves of the water flowing (no pun intended) very well with the movement of the music. He encounters a mermaid swimming close to him, but as he grows even closer the mermaid swims away and into the distance. 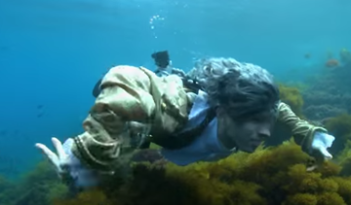 Then there is the quirky basketball scene which has the artist up against five tall and muscly players; balls bounce to the beat of the music and it’s actually something that will make you smile. 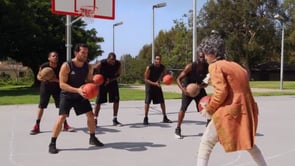 Ostrom says the original idea was to have everyone bouncing on pogo sticks; that would have been cool too! Then you mix in a few hip hop dancing scenes and now you’re wondering what the hell is going on? Throw in some more basketball scenes and the artist suddenly has success and scores a basket. How did this all happen?

As the music grew, so did the scenes and its traditional piano movements were quickly replaced by a more electronic sound and the music video really took off to greater heights! I have now seen the video more than ten times and every time I watch it I enjoy it more.

He immediately walks with a swagger; he’s dancing like it’s nobody’s business and he’s enjoying life. And then at 2:14 of the video, your heart skips a beat as the muse walks into focus wearing a lovely summer dress. The moment Stephanie Starkey arrives on scene, the artist’s life changes and with no disrespect to the amazing piano playing sequences, your eyes are immediately drawn to the model/actress.

They exchange glances, and as the music speeds up, so does the artist’s luck. All of a sudden he starts believing in himself and his talents, he’s persistent, he’s hitting fastballs, driving fancy cars and roller skating with the brunette, not to mention playing the music on a series of synths and toy organs.

Massive Sonata is a stunning and very well produced music video that deals with issues of exploring fears, growing confidence, searching for beauty and of course a beautiful girl. Ostrom explains that the meat of the video is of him playing piano and synthesizers but he wanted the video to provide the viewer an opportunity to “feel out what the song is all about.” He further explains that “Beethoven himself expressed a deep love for a girl or something intangible or even a love of beauty through his music” and Ostrom wanted that to be how he expressed his music as well.