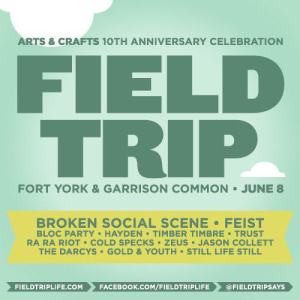 Toronto indie music legends, Broken Social Scene, will be reuniting for one show this spring: Field Trip, a festival celebrating 10 years of the record label “Arts & Crafts”. The label was formed in 2003 as a partnership between Broken Social Scene band leader Kevin Drew and former Virgin Records exec Jeffrey Remedios. This is awesome news for all Broken Social Scene lovers as the band has been on a hiatus since November 2011.

“Field Trip was built around the themes of discovery and community. In addition to world-class musical performances, the festival will incorporate local art, gourmet food and unique elements of Toronto’s proud culture,” said Jeffrey Remedios in a press release posted on the Arts & Crafts Website this morning. “Field Trip is a celebration – not just of Arts & Crafts’ 10-year anniversary and our artists – but of Toronto, of community and perhaps above all else, of the collaborative spirit.”

The Festival will take place on June 8 2013 at Historic Fort York in Toronto. Other acts performing at the show include Feist, Hayden, Ra Ra Riot, Timber Timbre, Cold Specks, and the newly acquired (in Canada), but already renowned, Bloc Party, who released their first album on Arts & Crafts last year (and it was amazing by the way), Four.

To those who have not seen a Broken Social Scene concert, I can promise a show like no other. The spirit of art and collaboration just glows from the ensemble on stage. Whether the member is playing an instrument, banging a tambourine, or just clapping at the back of the stage, each member is contributing in some important way.

Tickets will be going on sale this Wednesday.