The Sundance Film Festival starts today in Park City, Utah and runs for the next ten days. Highlighting the best of American and International independent films, Sundance is always a great showcase of the next great upcoming films for the year to come.

So it seems fitting to create a list of the top 5 films showing at Sundance that I am most looking forward to.

This made my list of films I am looking forward to in the first six months of 2013 and I can`t wait to hear the reactions of those seeing it at Sundance. Chan-Wook Park, the great creator of Oldboy, directs Matthew Goode, Nicole Kidman, and Mia Wasikowska in this horror thriller loosely based off of Bram Stoker`s Dracula, but without vampires.

The trailer premiered earlier this week, and in general this film looks fantastic. This is the first film Shane Carruth has made in nine years, and his last can be considered the best thinking man`s science fiction film of all time.

The East is brought by two darlings of the Sundance scene: Zal Batmanglij and Brit Marling. In 2011 they blew everyone away with the cult-infiltration thriller Sound of My Voice. This year, they are playing with similar themes. Not much is known but the summary floating around the net describes it as “A story centred on a contract worker who is tasked with infiltrating an anarchist group, only to find herself falling for its charismatic leader.” Like Sound of My Voice, the film stars Brit Marling and also has Ellen Paige and Alexander Skarsgård.

Some more light-hearted fare. A.C.O.D. (Adult Children of Divorce) has a stellar cast including Parks and Rec stars Adam Scott and Amy Poehler, the latter playing the former`s step-mom. Other stars rounding off this flick include: Mary Elizabeth Winstead, Jessica Alba, Jane Lynch, the always amazing Richard Jenkins, and everyone`s favourite mom, Catherine O’Hara. Don’t let the awkward title throw you. This looks to be one of the great comedies of 2013. 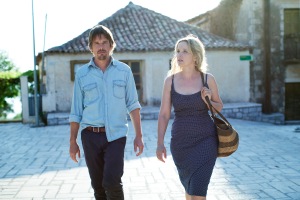 “Baby, you are going to miss that plane.” Those were the last words we heard in the ever-complicated relationship of Celine and Jesse in Before Sunset, the second film in what is now a trilogy of “Before ________” films. The first, Before Sunrise, had two twenty-something strangers meeting on a train in Europe, falling in love over the course of an evening, and promising to meet up  in six months time. The second, Before Sunset, had the two meeting 9 years later and faced with only a few hours, attempt to reconcile the fact that they did not meet as planned, not to mention the obvious chemistry which still exists between them. Now in their 40s, I cannot wait to see what comes with Before Midnight in their will they/won’t they relationship. I would consider Before Sunset to be one of the best movies of the last ten years. I can only hope that the follow-up captures my romantic side in the same way.