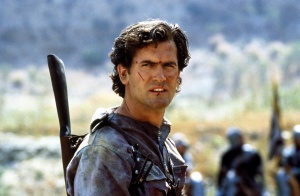 Legendary horror director Sam Raimi, who is currently doing the press tour for his very non-horror film Oz: The Great and Powerful, has finally said what his legion of fans have been waiting for: that he and his brother (Ivan) will be writing a script for Evil Dead 4 this summer. It has been over twenty years since we last had an official Evil Dead movie (1992’s Army of Darkness). Since then, Raimi has gone on to be a strong force on the studio circuit, directing three Spider-man films (two of them amazing!), the rather sub-par “The Gift”, and the Kevin Costner baseball rom-drama “For the Love of the Game”.

The Evil Dead franchise has had new life as of late with the remake of the original set to come out this summer. That film is being directed by Fede Alvarez and will mark his first feature-length film.

No real time table is set as of yet for when a release of Evil Dead 4 can be expected, but for now all that matters is that we may have our favourite S-Mart clerk making his triumphant return. Shop smart. Shop S-Mart.

The Movies of March

Most Anticipated Movies of February