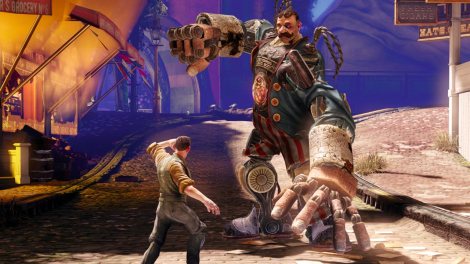 To the surprise of no one, Irrational Games’ Bioshock Infinite is a critical darling. Like the original, from which it gets its name, Infinite has racked up some of the highest critical praise in our medium. Game director Ken Levine will most surely remain at the upper echelon of game designers with his latest title; however, one can never be too sure that the game will sell. Nevertheless, Infinite’s praise will have it go down as one of, if not the best game(s) of this generation.

Here is what the media has to say:

Game Informer: Infinite is more than a new setting, story, and characters; those elements are seamlessly integrated with complex themes, a mysterious plot, and entertaining combat to create an amazing experience from beginning to end. Familiar threads run through it – a lighthouse, a strange city, a charismatic antagonist – but they are homages to the past rather than attempts to recycle it. The core of Infinite is unlike anything else on land, sea, or air. (10/10)

Machinima: With the release of BioShock Infinite, developer Irrational has delivered a bigger story, more polished experience, and created two similar-yet-separate games that can co-exist and remain equal in quality. When the history of videogames is written, not one, but two BioShocks will be remembered for pushing gameplay, story, and subject matter to new levels. (10/10)

Polygon: For everything it has to say, for all the questions it asks —many of which have no easy answers — BioShock Infinite’s big thoughts and complicated narrative don’t obscure the brilliant action game that carries those messages through. (10/10)

IGN:  In total,BioShock Infinite is a brilliant shooter that nudges the entire genre forward with innovations in both storytelling and gameplay. It trips over itself in a couple of spots, but not in any way that should keep you from embracing it with your utmost enthusiasm. (9.5/10)

Edge Magazine: That Infinite can handle the collision between its philosophical concerns and its dead-end thrills without seeming hopelessly crass or overly portentous testifies to its often touching script, excellent pacing and the kind of unparalleled world building that shows you all of this coexisting cohesively in a golden city in the sky. But it also demonstrates something else: BioShock’s mechanical evolution as a firstperson shooter. (9/10)