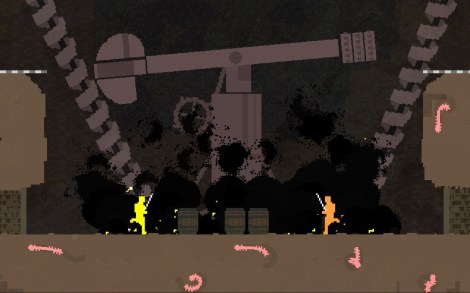 Please note: This is not a review. These are only my initial impressions

As I previously stated, my New Years Gaming Resolution is to play more pc games (particularly indie games). So it is a great pleasure to have such an amazing experience with my first indie game of 2014. Nidhogg is indeed something very special. Created by Mark “Messhof” Essen, the game is basically a tug of war game between two crudely pixelated, yet awesomely animated people, one yellow and the other orange, and they fence through a series of symmetrical screens until one player is victorious. The arenas in which you fight have a central starting point, and then from that point on, one side mirrors the other until you reach the ‘final screen’ at which victory comes from passing through a final door and standing triumphantly in front of a roaring crowd.

It is an amazing feeling. In the two hours I played the game last night, I only felt it a handful of times, but when I did it was such an amazing feeling of accomplishment. Some of my most epic duels lasted up to almost 8 minutes (while I am sure other fights with more talented people have lasted longer). It is a fighting game, but in many ways it is actually more similar to football. Every time you slay your opponent, you rush toward your end zone. The other player will then regenerate in front of you or behind you. The player will either stymie your progress, or leave you uninhibited to run into the next zone. Running toward the next door feels like seeing an opening in the defense and making a break for it. Sadly, for me, this ended most often in me running full tilt into my opponents regenerated sword. He would then dash toward his end zone, and so the back and forth begins. It is insanely addictive and frustrating and a formula I love and hate simultaneously.

You see, I can’t tell if I was any better at playing the game by the end of my two hours with it then when I was when I started. In many ways, it feels like rock, paper, scissors. I swear I died a thousand times and slayed my opponent just as many and by the end, the player that made it to their end zone was there as much out of luck as skill. It will probably take much more time with the game before I can fully comprehend the combat system. When to lunge, when to throw (a tactic that felt rather useless since it only ever left me as the one with no sword), perhaps these skills will come with time. There is a great feeling of dread that comes when your opponent still has his or her sword and you are left empty-handed. And then there are the moments when you leap over your opponent, retrieve your fallen sword and then continue to duel. It is a beautiful thing.

This would be so much more compelling if they had swords!

Really, it is this sense of feeling that makes Nidhogg a special game. The feeling of success and failure are constant. When you have a string of successful duels, there is no greater feeling of accomplishment but that can all be done away with in one bad duel. The back and forth is so gratifying, and it gives the game its addictive cohesion. Even now I feel I am going through withdrawal. Having not played it since last night, I can’t wait for my next duel, my next moment of success, my next moment of failure. I can’t wait to die over and over again. This is gaming in its almost purest form.

Nidhogg was released on Steam yesterday.