Kickstarter recently released their year-end numbers for 2013 – 3M people pledging 480M$ and I think I may have spent close to that much myself on wallets, comic-books, watches and various bits of tech and kit. 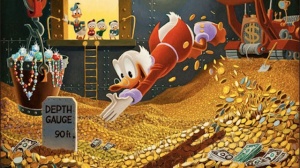 My experience with crowdfunding has basically followed the same mental tic as entering Costco for the first time:

What is this magical place? I… I NEED it.

(What do you need honey?)

(*sigh* tell me again why we need that many pickles and yogurt?)

After a while the compulsions wane, the pupils shrink back out of anime territory and you can see things a bit more rationally… and so with crowdfunding, behind all the blustery bombast, some very important things are happening.

We’re seeing talented people start to realize they can make what they want to make, and take risks that push the boundaries of their medium while still finding support.

With content starting to flow directly from creator to consumer outside the old industry model, the motivation is shifting from appeasing stock-holders and committees with broad/bland/safe appeal… towards content intended directly for its end-user, the fans.   This is a tremendous win-win for artists and their audience, but along with the model’s broad success we’re uncovering some unexpected pitfalls.

Besides the failures, disappointments and outright scams (*ahem Instacube), the lure of staggering monetary success has begun to draw some big (and decidedly “non-indie”) players.  For example, with celebrities jumping into crowd-funding the murky difference between passion projects and vanity is starting to show.   Take actor Zach Braff, following the staggering success of his peers’ Veronica Mars campaign (raising 5.7M via Kickstarter) he sought funding for his follow-up to Garden State raising 2M on Kickstarter.

*this is not an actual video link, but the picture seemed appropriate

However, after the campaign it was revealed that he had already secured millions in private funding from the traditional studio system – while not illegal or technically against the terms of service, this is a distasteful move to many, including Clerks director Kevin Smith:

Unlike back when I made ‘Clerks’ in ’91, I’ve GOT access to money now — so I should use that money and not suck any loot out of the crowd-funding marketplace that might otherwise go to a first-timer who can really use it

Good or bad crowdfunding has undeniably begun to change the landscape of the creator:consumer relationship – short-circuiting many of the ‘traditional’ pathways: from creation, through development, fabrication and distribution of both content and physical products.

Over the next few weeks I endeavour to highlight examples of already-funded and shipped projects across the spectrum of product and media with my Crowdfunded Edition articles.

I’ve already covered my experiences with the Pebble watch so this week I’ll be tackling film with practical effects genius Phil Tippett’s Mad God. This short film was recently finished, released to backers and now the world at large, and it is already starting to creep into film festivals and horror/sci-fi conventions across America.