Mad God was an under-the-radar Kickstarter, raking in a relatively small 124,156$ (for comparison Veronica Mars raised 5.7M) but stood out to me personally because it was the passion project of brilliant practical effects creator/pioneer Phil Tippett.  Even if you don’t know his name, you definitely know his work. 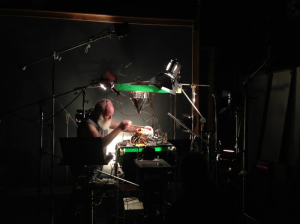 Tippett’s long list of credits include inventing the go-motion animation technique that brought to life the various creatures and machines of the Star Wars universe (while heading ILM animation department and Oscar winning creature shop) …also not to mention freakin’ Robocop’s ED-209, Starship Troopers’ bugs, and the pioneering mix of practical and cg effects for the dinosaurs of Jurassic Park.

When you hear the term ‘practical effects’ that is Phil Tippett – with painstaking time, attention to detail and a bristling imagination he brought to life the impossible and inspired a generation of geeks.

So, when Phil asked for money to make his own short film, a film that’s been festering in his messed-up head for decades, a film that in a typical studio environment would neeeeever see the light of day, I jumped in without hesitation.

you have 5 seconds to comply…

Mad God (Part 1) is a short film that currently clocks in at 11 minutes, with more parts coming.  It’s hand-made and animated using classic techniques that span the history of cinema: from live-action, to puppetry, to stop- and go-motion to in-camera effects and more.  Technique aside, the feel of the film is definitely, well… unique.  The world of Mad God is a disturbed world for damn sure with bizarre, nightmarish creatures and intricate, living alien ecosystems.

… (made) using hands, tools, molds, clay, toys, garbage, blood, and whatever else we can get our hands on 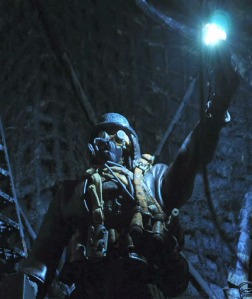 The main character appears to be some kind of a deep-world explorer, slowly working his(?) way down through layers of subterranean Miltonesque environments following a bizarre map– imagine instead of crumbling into dust and ruin, the old world just kept getting piled lower and lower as civilization progressed, leaving behind (or below) semi-intact but increasingly hellish evolutionary ecosystems throughout the strata of the earth.

In terms of tone, the closest I can say is if you remember that messed-up Tool video for Sober, you’re close.

Mad God is a rich, living and utterly fucked-up world, and the creatures populating it are the things of nightmares. It is not Hollywood, it is unapologetic, uncompromising and clearly the work of a mad genius.  You can check it out for yourself here:

Mad God is starting to show up on the festival circuit, and representing the platform crowdfunded films across the board are winning awards:

Finally, with a viable alternative studio system, filmmakers are proving that there is in fact an audience for content that would never see the light of day in an increasingly risk-averse Hollywood.  And as the crowdfunding model continues to mature drawing bigger names and directors, it remains to be sween whether Hollywood will adapt or be left-behind.