Not every joke worked, but what was great about this years Oscars was just how much we were able to see the stars of Hollywood as people. Things like that selfie image, the pizza, the dancing to Pharrell’s “Happy”, all these things managed to break the pomp of the standard Oscars award show and bring a new level of intimacy to the A-list actors of our generation. One could have been forgiven if they didn’t realize that awards were actually handed out because it was this spontaneity that made the night.

As for the awards, much like the Golden Globes that proceeded it, there was not one clear winner that stole the show. Gravity won 7 awards including best cinematography and directing, Dallas Buyers Club won awards in both male acting categories, and 12 Years a Slave took home best supporting actress (Lupita Nyong’o) and the big one, Best Picture. It was strange seeing American Hustle, a film that had 10 award nominations, get absolutely shut out, but I couldn’t think of a single award it deserved to win more than any of the other nominees. I was so happy that Spike Jonze won best original screenplay for Her over David O. Russel’s “Hustle”. And while Amy Adams certainly had a strong performance, everyone knew upon Blue Jasmine’s release that this was Cate Blanchet’s year.

In general it was a very safe year for awards. There were no upsets because there really were no favourites. It was a year of great film going. Here is a list of all of last night’s winners: 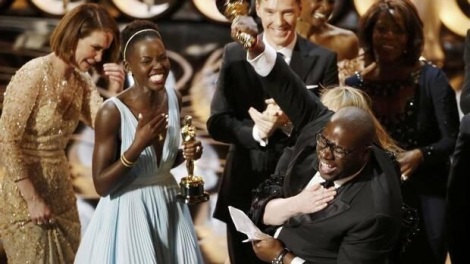 ORIGINAL SONG: “Let It Go” from “Frozen,” music and lyrics by Kristen Anderson-Lopez and Robert Lopez