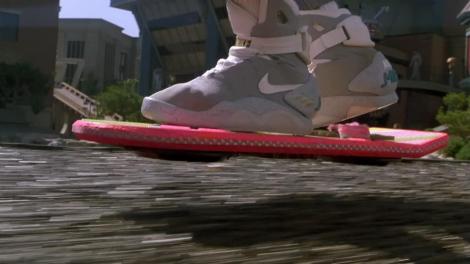 In what is obviously a clever piece of viral marketing or epic trolling, the internet is erupting in enthusiasm for what looks to be the first working hoverboard produced by an unknown company called Huvr Tech.

You can see in the video below: a bunch of young hip scientists circled around people like Moby (musician), Tony Hawk (pro skater), and Terrell Owens (football player), and Back to the Future’s own Doc Brown, Christopher Lloyd, as they test the iPhone enabled board.

It is an impressive video, and almost surely a lie. That hasn’t stopped many hopefuls from believing in its validity, but come on, to think that such tech could come out in such a final stage in the information overload world we live in is absolutely preposterous. There are really only two ways hovering or levitation works: trapping air underneath an object ala a hovercraft; or magnetism involving superconductors. Trapping air like a hovercraft would allow for mobility across any surface but would require a skirt to work. Using magnets and superconductors, a track is required for levitation to work meaning at a basic level you would be stuck to a very singular path. Had any revelations in science preceded the release of this video countering said science, it would have been an incredibly documented find.

So for those of the more cynical bend, myself included, this is clearly fake and more likely viral marketing in its purest form. Some are saying it is Back to the Future 4. My best guess? This is a viral campaign for Nike’s automatic lacing shoes that they announced will be coming out in 2015. Nike would certainly have the money required to hire all of these high-profile people to be involved in its marketing.

But what are your thoughts? At the very least this keeps the dream of hoverboards alive and forces our scientists to prioritize levitation over curing cancer.

For a legit air board, check out the video below:

Also check out this cool Ted Talk on the use of superconductors for levitation:

Back to the Future 2’s epic hoverboard chase:

UPDATE: The Verge is reporting that Funny or Die may actually be behind this, though nobody seems to know why. Costume designer Lauren Beidenharn actually had the Huvr video on her resume, listing it as a Funny or Die production. Despite this, Huvr still claims they have legitimately created the first working hoverboard and are defending it on their facebook page: https://www.facebook.com/huvrtech

UPDATE 2: And so it turns out that it was Funny or Die! Why? Who the hell knows. Well it was a fun little mystery while it lasted. You can check out Funny or Die’s apology video below:

Check out some other funky tech, games, books, beer and movies in our reviews section here!

One response to “Is this hoverboard video real?”