The Destiny beta has come and gone and I was one of the lucky 4 million users (wow, that is a lot of people) who got to take it for a test spin. The following represents my initial impressions. There were things I found amazing and others I found underwhelming. While reading, it must be maintained that all of these thoughts are based on an unfinished product. We don’t know what the final product will be like, and what lessons Bungie will have learned from its Beta. For that we will have to wait until the final product due for release in September. For now, here are my thoughts on what Bungie unveiled.

At the heart of the destiny beta is unscripted interactivity, and for lack of a better word, it’s awesome. Building on the cooperative sandboxes Bungie built with Halo, the studio has created spaces grand in scale and threw a hole bunch of strangers in there resulting in a really cool social experiment. Akin to the cooperative gameplay in the indie hit Journey, you approach the Avatars of strangers and begin a system of non-verbal communication. This is wear Destiny shines!

The main social hub in the game is the Tower. It is a gathering place for all of the respective Guardians (yours and other players’ characters) set up with shops to trade your mission bounties for the latest in arms and wares. If you require meetings with the authorities of your class commanders, all notable NPCs have their respective areas. Basically, these are your standard MMO tropes. What makes the tower truly special, however, is the level of interaction you have with your fellow strangers within its setting. You are limited to four basic interactions: wave, point, dance, and sit down, and using these four actions, you begin to develop a non-verbal system of communication. Playing with combinations of movement, you develop short friendships as you start miniature dance parties and more. Bungie must have known that people would want to spend long durations of time just chilling in the tower as they put no shortage of activities at your disposal like big red bouncy balls and soccer balls, as well as a jungle gym of objects that are just barely possible to reach that you can’t help but want to climb to the top of them and scream victory. When you see someone dancing on top of a seemingly unreachable orange awning, you do everything in your power to get up there yourself. Suddenly you see five or six people jumping from crate to tree to all other forms of geometry in an effort to get to that same spot.

When you finish with the Tower, the main play area the beta puts you in is Old Russia. As a playground, it is very reminiscent of Borderlands’ Pandora. In a territory known as the cosmodrome, you partake in quests with your fire team, but don’t let that deter you from joining the numerous other parties fighting fallen and hive soldiers throughout the large main map. Like the tower, these are complete strangers, and your only interaction with them will be your fighting by their side and perhaps a dance of victory in the aftermath of an epic confrontation.  Aside from your actual mission quests, you will occasionally be met with public events. These events take place at random and act as a variation on the traditional horde mode style of gameplay. Survive a specific number of waves of enemies, or perhaps take down one massive tank as you are flanked by randomly spawning enemies. What is somewhat disappointing is the fact that once you continue on with your quest, you are left with your fireteam and your fireteam alone. Meaning if you are wandering Old Russia on your own and stumble across a group of Guardians fighting a pack of fallen, if you continue to move with them into a specific objective zone, if you were not on their Fireteam, they effectively disappear. This is disappointing considering the general spontaneous and structureless approach to gameplay the game actually sets out to propagate at all other times.

If there is a general theme I am trying to get across here, it is that what makes Destiny its most special is the general level of spontaneity it excels at whenever you are not confined by the structured rules of mission-based gameplay. 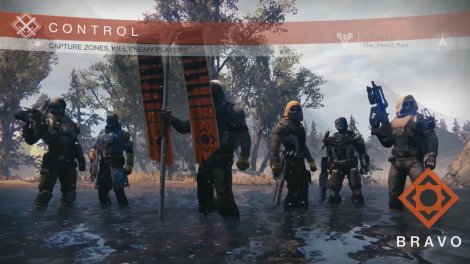 The other main gameplay element of Destiny is its PvP multiplayer. Sadly, this is where the game fell short the most in my few days with the Beta. It is a shame since PvP was Bungie’s bread and butter for so long. Now it must be understood, this was a beta and access to game modes was limited to one, a domination style game mode where you capture certain points on the map. But the level design of the maps that were available were generally a chaotic mess, filled with overpowered vehicles and hard to see opponents. This was particularly true of the Moon-based multiplayer map. Sometimes opponents were so hard to see, I would run around for minutes at a time without seeing a single adversary to shoot. Reading around online, it seems many people had the same issues, so perhaps this will be addressed in the final build of the game. Issues like these, after all, are the reasons why you have betas. But in the aftermath of the fast, frenetic gameplay of PvP fps games like Titanfall, it is hard to invest time in Destiny’s current slate of combat arenas with more than just passive interest.

The actual story-based quests of Destiny, that is the cooperative, objective-based missions, were very reminiscent of Borderlands with a prettier coat of paint. There are specific mission points on your map; however getting to those points will take you through zones continuously enhabbited by a certain type of enemy (fallen, the hive, etc.). Once you reach your active mission point, all capacity for regeneration after death is turned off, or so you are informed by a prompt on the screen. In truth, you can respawn, however it beams you back to the beginning of that stage and you have to run all the way back to wherever it was you died. Like Borderlands, game territories are recycled for various mission objectives, however, unlike Borderlands, you are unable to try to take care of multiple objectives simultaneously. You are allowed one mission at a time with Destiny. The structure of the encounters however feel born out of Gearboxes grind-focused RPG.

If I can voice another complaint, the enemy design is straight up boring. There is very little variety in enemy types, minus the occasional heavies. With only limited story context, I can’t by any means claim to be an expert in Destiny’s fiction, and if I tried to discern the difference between The Fallen and The Hive based on look alone, I wouldn’t be able to do it. Their character designs are so similar, I couldn’t tell when I was fighting one vs the other. During one mission, the two enemy groups were fighting each other. Think of that epic battle in Halo 2 when the Brutes and the Elites battle it out on High Charity. It was a brilliantly immersive moment within Halo 2’s campaign and I loved just sitting back and watching the chaos unfold without a single interaction from myself. I felt nothing like that with Destiny, and I think a lot of that has to do I with the general character design. Again, with Halo you have this diverse set of enemy types, between Brutes, Elites, Jackals, Grunts and more. You had this sense of depth to the universe, but with Destiny it is all so monotonous and generic. Once again, this is just the beta and more enemy types or characters may come around that draw me more into the game’s fiction, but for now, it is certainly underwhelming.

It should be evident from this preview that Destiny is doing some very unique things. I just can’t praise enough the spontaneous interactivity the game encourages. But it is sad that that spirit doesn’t permeate the core gameplay of Destiny’s mission structure. The idea of joining forces with complete strangers is like being a kid in a playground with no bullies in sight. Interact with whoever you want without any repercussion or intumidation. Remove that and Destiny becomes a rather generic, yet pretty, RPG-lite shooter. We’ll have to wait a few weeks more before we get the final product, and I am curious to see what that product looks like and what lessons they learned from the beta. All of this said, colour me very interested where once I was skeptical in Bungie’s latest universe.