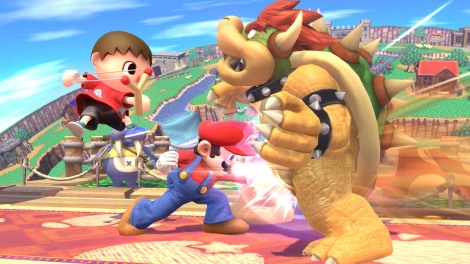 Okay. This is the big one. The Wii U’s flagship fall release is probably also the biggest game launch of the year with the exception of maybe the previous Nintendo release of Mario Kart 8. In Smash Bros. Nintendo is throwing down one of its Aces – a top franchise and system mover that comes once a generation. Similar in scale to a Zelda or 3D Mario game, Super Smash Bros. has been a staple release for Nintendo since the original version on the N64. But just how good is it? Well, it looks like it is pretty freakin’ amazing. In an age where almost every game feels broken in some regards, Nintendo has released a solid multiplayer experience free of bugs. Check out the reviews below:

Game Informer: Even if you aren’t able to regularly round up an eight-player posse, there’s more than enough great stuff here to keep you busy – both solo or in traditional four-way matches. I’ve had a great time rekindling old Smash Bros. rivalries from the GameCube era and introducing it to a new generation of players. Its mix of accessibility and deep strategy is remarkable, and it’s an instant lock in my party-game rotation. (9.75/10)

Polygon: Pound for pound, Super Smash Bros. for Wii U has been the most fun I’ve had playing video games in 2014, and a well-polished crown jewel in the Wii U’s library. I’ve spent dozens of hours Smashing roomfuls of friends into oblivion, grinding through events and hunting down unlockables — and, happily, I feel like I’m just getting started. (9.5/10)

Games Radar: Super Smash Bros. for Wii U is the sequel you’ve been waiting for; a fighter that’s as finely tuned and well-balanced as it is beautiful. The core experience of intense back-and-forth brawling is so spectacular that it makes the few lackluster modes feel more like unneeded extras than disappointments. Whether alone, with friends, or against equally skilled strangers, this Smash Bros. offers excellent fighting that’s enduringly exciting. (4.5/5)

Giant Bomb: Some modes flop in Super Smash Bros. for Wii U, but the important thing is that the core game is expanded upon and significantly improved over entries in the franchise’s past. Its roster and stages are unmatched, and the variety of controller options is fantastic. 8-Player Smash wound up being far more fun than I expected it to be, and is destined to become a game night/party staple for years to come. It’s one of the best reasons to own a Wii U, and it’s easily one of 2014’s premier multiplayer experiences. (4/5)