Polygon’s Ben Kuchera recently wrote a rather interesting opinion piece on video game criticism, describing the trade as based on two levels: the surface level criticisms that relay information on game mechanics, functionality, etc.; and a second level of criticism that attempts to delve beyond the basic idea of ‘is a game playable’ and instead seeks to comment on the game’s place in society. With Never Alone, the first game from Alaska-based studio Upper One Games, I could spend my time writing about how yes there are some collision detection issues, that at times the level design is frustrating or the puzzles seem too simplistic. I could go on about how the floatiness of one of your playable characters toward the end of the game makes traversal sometimes infuriating. Yet to focus on these issues, which by no means break the game (like some more recent AAA outings), would be to do a disservice to one of the most unique and culturally important games of the year. It is in this second layer where Never Alone stands out.

To understand Never Alone’s importance, you have to understand its origins. As I said above, Never Alone is the first game to come from Upper One Games. Upper One is a studio that was formed as part of an initiative by the Cook Inlet Tribal Council, a non-profit group based out of an Iñupiat community in Anchorage, Alaska. It is also the first 100% Aboriginal studio in the United States. The Council launched Upper One Games to sustain and promote Alaska Native cultures through a digital medium with the hopes that their games could retain the cultural legacy through their young audience. The game is told from the vantage of an elder telling the story of a village under the onslaught of a constant blizzard. The elder tells of a young girl who befriends an arctic fox, and that the two of them set out to brave the northern elements to seek out the source of the blizzard and save their village. Throughout their journey, the young girl, Nuna, and her adorable fox sidekick encounter various spirits, evil or mischievous creatures, polar animals, and various other themes common in Iñupiat story-telling. The story is anything but deep, yet its cultural resonance is strong throughout. As an additional layer of cultural content, Never Alone embeds mini-documentaries on the Iñupiat people and their culture throughout the experience. These documentary shorts cover everything from Iñupiat way of life, the arctic landscape, cultural beliefs, and more. They are not presented in any over-bearing way. Instead, they are an available option for those interested to learn more about the Iñupiat. They are well produced, and I found myself watching the great majority of those that I could find. 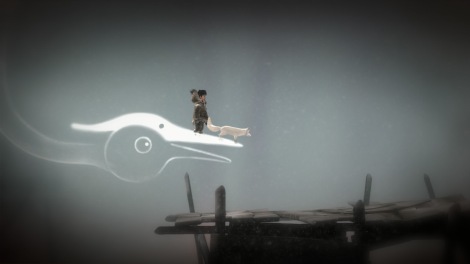 To make such a cultural artifact is a unique experience in gaming. In an industry bogged down by a litany of sequels or formulaic games that have a “been there, done that” aesthetic, Never Alone presents something that is truly different, not only in its subject matter but also in its intent. Game designers, I’m sure, often have the loftiest of intentions when dreaming up their ideal product, but it is very rare to see such aspirations tied to such pure and novel causes. Your average shooter does not have to worry about military culture dying. Yet for aboriginal peoples living immersed in a culture not-of-their-own, that fear of a cultural death is real and carries very heavy meaning. Watching their youth turn to social media, video games and the like and away from traditions passed down through generations, the Iñupiat people decided to do something about it, and on that level it works significantly well. I feel as though I have learned much about the Iñupiat people in my few hours playing the game and my curiosity to know more speaks volumes. To see such novel embrace of new technologies as an exercise in the continuation of traditional story-telling speaks strongly to the narrative skills of the Iñupiat people.

So why should one play Never Alone? Well if you are only interested in the surface level reasons of why you should play any game, it works, barring a few frustrations but nothing game breaking, and it is beautiful and fun, not to mention that it has a little white fox that is adorable as heck. But for those willing to dig deeper, it is a game that carries meaning and purpose. It is a game attempting to be representative of the voice of an entire culture, and how often can you say a game carries that much weight?

Never Alone is published by E-Line Media and is available on Xbox One, Playstation 4, and PC.