I really really wanted to like Dontnod Entertainment’s Life is Strange, an episodic choose your own adventure game that marries the choice-based systems of the Telltale universe with the unique character types of Gone Home. The concept of playing an interactive story so relatively different from most of the video game fodder out there was very exciting. All of the media leading up to the game’s release felt refreshing. It even made my 25 most anticipated games of 2015. It is incredibly disappointing then that the game fell so short of my expectations.

For its part, the game presents us with a unique character for the medium. Max is an introverted geeky high school student who attends a private school specializing in its arts programs. Her specialty if photography and she walks through the world with an eye to capturing its beauty. Inspired by the indie films of Sundance or Tribeca, Max is your basic every girl, ignored by everyone except those who are close to her. Within that framework however, the game tiptoes the line between earnest and cliché. Take for instance how Max chooses to use a Polaroid camera rather than your more popular digital cameras. She takes artsy selfies rather than your average sepia-toned Instagram. All of this is supposed to make her feel unique and yet none of it actually seems original at all. As if checking off boxes from some alternative culture checklist, it all has that been here done that feeling that indie films have had since Zach Braff’s Garden State.

The true question is, is this character relatable and my fear is that she is not. Everything she represents seems more like the creation of men dreaming up their ideal high school girlfriend, rather than a believable true-to-life 18 year old girl. I’m curious to find out whether there was actually anyone on the creative side of the staff at Dontnod who was a woman, as Max reeks of an absence of true female experience. Her introverted soft-spoken nature hides her true nature as a cute honest and earnest girl with great taste in music and film. In other words, she is super cool, its just that no one except a select few around her know that. She plays out like a pixie dream girl, hold the manic. It all comes off as superficial. All of that being said, it is nice to see a character that doesn’t fit the typical video game protagonist mode (read adult male with a gun). To this end, Dotnod should continue to be heralded for its creation of female main protagonists, a rarity in this industry.I just hope that someday they create one that seems less designed by committee. 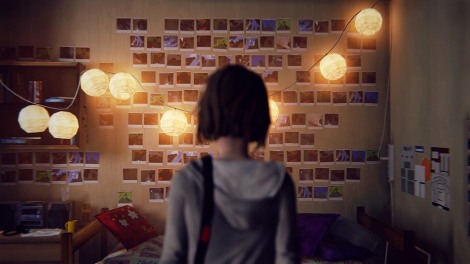 While Max may have some complexity to her, the script falls apart in how it treats its other characters. Secondary characters strive for complexity but in almost all occasions come off as one note. Characters to which you are supposed to feel negatively toward are so outright evil in the impressions they give, you can’t help but feel they are more caricature than character (The drug dealing rich kid, the paranoid evil step father, the Regina George-esque rich mean girl who communicates in nothing but snark). The clichés don’t stop at negative character types. The cinephile best friend who name drops so many geeky films that it reads like a best-of from Aintitcool.com, or Chloe, the baggage-ridden blue-haired friend who spews out atrocious dialogue (Come on, who actually uses ‘hella’ without irony in common conversation???) represent archetypes of alternative culture losers who we are supposed to naturally gravitate toward. Sadly they are more patronizing than relatable.

In terms of gameplay, the mechanics revolve primarily around branching discussion choices (think Telltale games) and time travel. Time travel only really works in the short-term, limited to re-making choices, or correcting a missed puzzle. In truth, it is every high school student’s dream. Who never felt like they had said the wrong thing, or made the wrong choice and wished they only had the chance to redo it. It is a compelling use of time travel as it is more grounded in what an actual high school student would do, rather than more altruistic/heroic paths.

Puzzles are not always intuitive. There are no deviating paths. You have to complete the puzzle the way the developer designed it, and if you fail to see the answer within a given amount of time, you must use your time travel power to go back a minute or two and try to find the answer again. Miss your cue once more and you rewind, repeat. It is a system that works, however it feels very restrained. I’d love to see fewer cues on when you must use your power in future episodes as the feeling of consequence is very limited in the game’s first episode.

The big sell of this game is how pretty it looks. Foregoing detailed textures for a greater concentration on the use of colour, developer Dontnod has created a very unique aesthetic for this game. The fall colours and permanent sunset that fill the small town Oregon landscape give the game a feeling of serenity and meditation.  Foreshadowing scenes of a tornado heading toward the small town look hauntingly beautiful in their design.

To match its vibrant autumnal look, the game has a simple and inoffensive singer-songwriter soundtrack that well-accompanies the gameplay. It can at times feel a little too obvious, a common complaint with this game (re: obvious character types), as its melodic tones  create mini-music video-like vignettes. There was one moment however that was just too much for me, when the aforementioned Chloe demanded that her and Max “thrash” to what can only be described as unobjectionable pop. Watching the girls dancing so hard to such lame music reminded me more of a feminine hygiene ad than it did any believable scenario in which friends would rock-out.

As an episodic game, the first episode has to hook you, and to a certain degree, Episode 1 of Life is Strange creates a compelling mystery that I wish to resolve. The disappearance of one character, the motivations of the more sinister players, the seemingly inevitable storm that looks to devastate the town, all of these have me wanting to play episode 2. Sadly, the characters do not convey that same sense of mystery and gravity. If there is any reason why I would not want to continue, it is that the game thinks it is making these characters and their motivations complex, when in truth you can’t help but feel how artificial every scenario actually is. It is a shame because I feel like the designers came up with something that they feel is truly unique and complex. Sadly this is just not the case. I truly hope that episode 2 can change my perspective on this game for if it feels like the same old recycled alternative culture cliches, episode 3 is going to be a really tough sell.

Game was played on Xbox One

One response to “Life Is (not that) Strange (Review)”