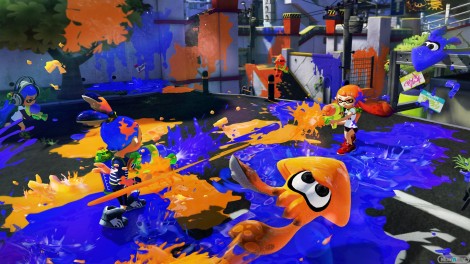 I feel like I have been crying out for a new IP from Nintendo for a decade now. Really, has Nintendo’s core group of developers designed a new property since Pikmin back in 2001? Well it took some time, but Nintendo has finally delivered on that demand, and the end-product, Splatoon, looks to be a fun deviation from the standard 3rd Person Shooter that appeals to younger and older audiences alike. I think what actually appeals to me more than the multiplayer, and this is very surprising, is how the main single-player campaign looks to be a spiritual successor to the 3D Mario games (Galaxy, 3D World, etc.). For lack of a better word, the campaign is a platformer, which is an exciting concept that Nintendo doesn’t seem to be touching upon, given it is their pedigree design formula.

But what do the reviewers have to say about the game?

The Escapist: Despite the good design, there’s no truly great design. I’d hoped for more puzzle segments and clever mechanics subversion, and there’s opportunity for Portal-like complexity that goes unfulfilled. Hopefully some of Nintendo’s DLC can fill that hole. There’s also some impetus for single player even for multiplayer devotees, as unlockables and secrets from there can transfer over to multiplayer matches for new weapons and tricks. Ultimately, however, multiplayer is the main event – even if singleplayer is nice – and if nobody in the house is going to try much multiplayer you might want to rent or skip the game. (4.5/5)

Destructoid: In some ways, Splatoon‘s online component is disappointing, and the lack of so many features will likely push other shooter fans away. But most of those shortcomings can be forgiven in my mind because of how damn fun it is. As a shooter it’s refreshing, and as a 3D platformer it’s up there with some of Nintendo’s greatest creations. You’ll quickly forget about the fact that you’re playing Turf War over and over as you squid down an alley, leap across a gap, and shoot enemies in the air as you fall. All Nintendo needs to do is keep supporting Splatoon, because the foundation is fantastic. (8.5/10)

The Guardian: On its own, Splatoon is a lovely, exciting and most importantly, different shooter. Is it the perfect shooter for people who don’t like shooters that some were hoping for? Not quite. People who are terrible at Call of Duty will probably still be terrible at this game – and for those players, the experience occasionally suffers as a result. But it would be ridiculous to miss out on this just because you can’t fire straight to save your life. (4/5)

IGN: Nintendo’s take on the third-person shooter is refreshingly original, with lots of impressive tools and skillful mobility. Matches are consistently fun and tense, and the mechanics feel simple enough that almost anyone can contribute positively. Splatoon really needs the extra modes and content Nintendo says is coming once a portion of the community levels up a bit, and not having voice chat is a bummer, but what is here feels polished and kept me claiming turf for hours. (7.9/10)

Games Radar: It breaks my squid-loving heart to be so down on Splatoon, because the core gameplay offered is one of the freshest and most exciting things to come out of Nintendo in years. But I can’t help but feel like this game should have come out three, maybe six months later, when all of the content is finished and included on the disc. As it stands, there’s simply not enough game here on day one to make Splatoon anything more than a weekend curiosity, and there’s no telling whether the content coming down the pipeline will be worth sticking around for.