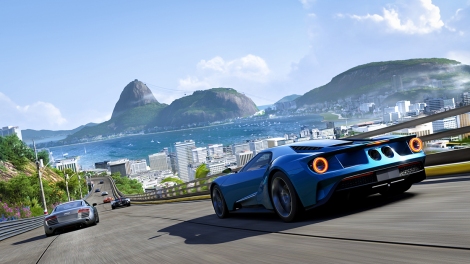 Do you hear the sound of engines roaring? That can only mean one thing: Forza season. It is hard to believe that we have reached the 6th iteration of the Forza series already. In truth, if you consider the two Horizon titles, it is technically the 8th Forza game. And yet despite the biennial nature of the series, developer Turn 10 seems to improve the franchise with each iteration. With Forza 6, the pattern of improvement culminates in what may be one of the largest Forza games yet, including welcome additions like night racing and weather. Having spent some time with the game, let me tell you, the rain effects in this game are the real deal. Catching a puddle with only one of your tires creates a loss of control unmatched in gaming. These are not aesthetic additions, but game changers with their own physics.

One does have to question, however, how long Microsoft will keep this biennial pattern alive. For a console that is only reaching its second birthday, the Xbox One now has 3 exclusive racers. It leads to question, just how much racing does the Xbox need? Personally, I would love to see them take some time off of the franchise, perhaps even throw in a cart racer as a pallet cleanser. That said, the reviews are as strong as any other game in the franchise. See them all below:

The Sixth Axis: Forza Motorsport 6 is beautiful, meticulous, dramatic and generous. It is arguably a faultless piece of driving software, and on top of that, Turn 10 have definitively proven that the Xbox One is an exceptionally capable machine when in the right hands. Serious racing fans owe it to themselves to experience Forza 6, while franchise stalwarts may find that this is the next generation Forza they were waiting for. (10/10)

Destructoid: It’s important to note that if you don’t really love the idea of reworked rain effects, you probably won’t find a whole lot that’s fundamentally new outside of the fact that there’s just more to do in general. For me though, it was enough to outright bring me back into the racing fold. I found myself racing for hours, racking up credits, ferociously buying new cars to add to my garage, and cursing at my friend’s Drivatars. Forza 6 is the new king of simulation racing. (9.5/10)

Game Trailers: Forza Motorsport 6 maintains the series’ strong handling, robust features, and its ability to bring together players of varied skill levels. There are improvements in virtually every area, but even with additions like night and weather, it doesn’t really feel like there’s a standout change to push the series forward. It seems like most of the effort this time around went into getting Forza back on track. (8.9/10)