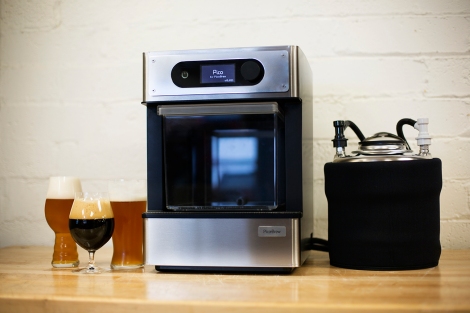 Every once in a while, a Kickstarter campaign just speaks to me. I have always wanted to dip my toes into the world of home brewing, but couldn’t pass beyond that initial thought due to the logistical nightmare it would seem to be to create truly drinkable and enjoyable brews from home. First off, I live in a condo. While not teeny weeny, the idea of having a home brew set-up on the 16th floor just doesn’t seem reasonable. Then there was my second line of logic – there are so many amazing craft brewers out there making such amazing beer, why make my own likely average-to-sub-par beer when I can just enjoy a growler from my neighbourhood brewer? Or the thousands of micro breweries located throughout North America? Yet the PicoBrew seems to answer both of my issues with one relatively small product! Like a Keurig for Beer, the PicoBrew has pre-fabbed packs of ingredients from some of the leading breweries in the world that get inserted into the relatively compact device, brewed, and then with the addition of some yeast, can be kegged in about a week’s time. Yes the process is still a little more involved than your morning coffee, but when faced with an actual garage operation, this process is relatively simple.

The PicoBrew has already far-surpassed it’s Kickstarter goal with a full 13 days still before closing, but don’t let that sway you from paying attention to this really interesting and innovative product if you are a serious craft-beer drinker with even the slightest inclination toward home-brewing.

Check out the Kickstarter here, as well as their product video below: