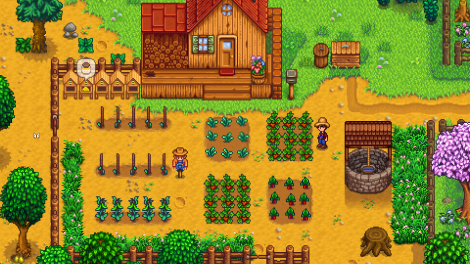 Today I would like to talk about Stardew Valley. I know, I know, that game came out forever ago, at least in video game terms. But Stardew Valley has come to mean something rather deep for me. On August 1, 2016, my daughter Sophie was born. Prior to her birth, I played what some may call an unhealthy amount of video games. Although I am not part of the games industry in any way, I found myself suffering from a massive case of FOMO (that’s fear of missing out for those not down with the slang…), and so I tried to play everything with any amount of buzz attached to it. That all came to an end on August 1st, and rightfully so. Here was a tiny little dependent being who required my attention and nurturing care. Other things in my life obviously had to be sacrificed.

Now don’t get me wrong, I still played games. Babies sleep after all. But I found that without an endless amount of free time, I had to be much more selective on what I played. Multiplayer was a complete write-off. Anything that can’t be paused is problematic when you don’t know when your next interruption is going to come. Prior to her birth I was heavily active on Overwatch, and still actually found plenty of fun in Halo 5, whose awesome post-launch content kept me playing for months. (I’ll talk about that on a later episode). But with games like Battlefield 1 and Titanfall 2, I didn’t even bother with multiplayer because I knew I did not have the time to dedicate myself to becoming even remotely competitive, nor did I want to have to quit mid-match because my daughter was screaming in the next room.

Now in those first few months, Sophie slept a lot, as most new babies do. This did mean I could play some single player games. I worked my way through Deus Ex: Mankind Divided slowly but surely. I finished both Mafia 3 and Titanfall 2’s single player campaign as well. Yet as she aged, it became more and more difficult to play games as she slept less and less. It was at that time, just after Christmas, that I decided to boot up Stardew Valley. I had played the game when it came out earlier last year, and had enjoyed it for a few weeks, but at the time it felt rather disposable. However, having recently come out for consoles a few weeks prior, I felt like it could be a good fit to a rather non-existent gaming schedule and man was I right. I picked up Stardew for my Xbox One even though I already had it for my PC. If I was going to game, I wanted it to be on a comfy couch in the confines of my living room. And I started a brand new farm from scratch.

The beauty of Stardew Valley is how it sets goals, or rather how you set goals for each in-game day on your farm. The game’s format, separated into days of seasons, 28 days in each, and continued growth season over season, year over year is perfect for the minimalist gamer. Start a day with a checklist, try to meet those goals, go to sleep and save. Only have 20 minutes? That is just enough time to get a day’s worth of labour in. Are you lucky enough to have one of those long baby naps? Get a few more days in. Should your baby wake up mid-day, so what! The loss of progress on that day never feels like a punch in the gut. It never feels like backtracking or repetition, mainly because the whole game is built on repetition and menial tasks.

My daughter has a more rigid sleeping schedule now, one that incorporates a proper bedtime and all that, so my gaming window has opened up, so I am actually getting back into bigger games like for instance now I am playing Horizon Zero Dawn on my PS4. But I look back at my time with Stardew in this wholly appreciative light now. I see it as this game that defined not only a moment in my life but also in my relationship with my daughter. It allowed me the opportunity to remain in the hobby I love so much, and yet still dedicate all of that necessary time to my burgeoning child. And for that, I think it will always hold a special place in my heart.

This was originally posted on Refined Geekery’s Anchor.fm channel. You can favourite the channel here, and listen to the audio version of this below:
https://anchor.fm/e/9a0bf0?at=25143