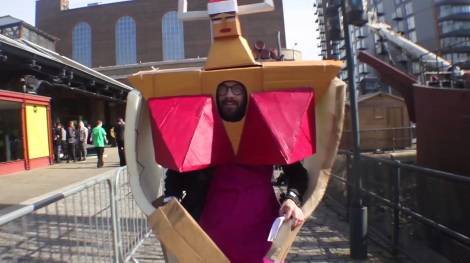 Kristian Andrews, master of film and game design, has posted an awesome video of his misadventures attending EGX Rezzed 2015 in full Barbara-Ian cosplay. Apparently EGX were less than cavalier to Babs so she took it on herself to seek retribution. Andrews is one of a two man team that make up Owlbear Studios, the developers of Barbara-Ian – the other being Sam Chester. Earlier in the month, I had the pleasure of having a chat with the two of them about their game, currently on Steam Project Greenlight (vote for it here). They were two first-class gents and I hope you check out the video here. Andrews is also a pretty kick-ass film maker, director of the awesome “Let’s Play Nomad X” which we highlighted last year in a Short Film Friday segment.